Subscribe to our show on Apple Podcasts, Google Podcasts,Spotify, Anchor.fm, and beyond.

Give us a review on Apple Podcasts if you like what you hear!

There’s not many people in this world who can say they are one of the world’s foremost connoisseurs of cannabis, except David Crosby. We had the honor of sitting down with Crosby (singer/song-writer/musician), 2-time Rock & Roll Hall of Famer and founding member of Crosby, Stills, Nash & Young and The Byrds. David tells us about how he’s utilized cannabis consumption to help with his writing process and to help inspire the hundreds of songs he’s created. We talk about how he’s been a successful musician for over five decades with cannabis always being a constant in his life.

David provides insight into what it felt to play at Woodstock in 69′ and one of the memorable stories he remembered from that day. As a leader of the counterculture in the 60’s David is still very passionate about global warming, anti-war rhetoric amongst many other passions that still play out in his daily life.

We wrap up the episode talking about Mighty Croz Cannabis Brand created by Crosby and Steven Sponder focusing on high quality cannabis teaming up with cultivators and companies that share their vision. We’ll have to be patient for the debut of Mighty Croz as Crosby and his team are waiting for federal legalization to release the brand to the masses. Until then you can catch up on one of the 5 new albums David has released in the last 6 years!

David Crosby has been at the forefront of rock stardom for five decades. The native Californian is a founding member of two of the most successful bands ever – the iconic,  CROSBY, STILLS, NASH & YOUNG and  THE BYRDS. He has sold over 35 million albums, has twice been inducted into the Rock & Roll Hall of Fame and the prestigious Songwriters Hall 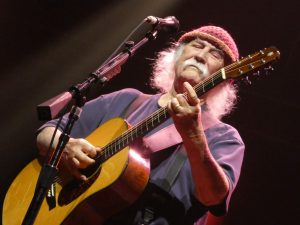 of Fame. The Grammy award-winning singer, songwriter, guitarist, activist, counter-culture icon, author and cannabis advocate has had an unparalleled career. Crosby has written songs that resonate as indelible cultural touchstones for more than three generations. His songs are heard by millions around the world each day and he is in the history books for performing at the original Woodstock festival. Crosby serves as the social conscience for the baby-boomer generation – the largest segment of the population.

In 2020, David Crosby is as vibrant, energized and prolific as ever with five new albums in the last 6 years years with his Lighthouse Band and his Sky Trails band. His towering influence and ability to capture the spirit of our times persists. He continues performing and was also the subject of an award-winning documentary (“Remember My Name”) on his colorful life produced by Cameron Crowe.